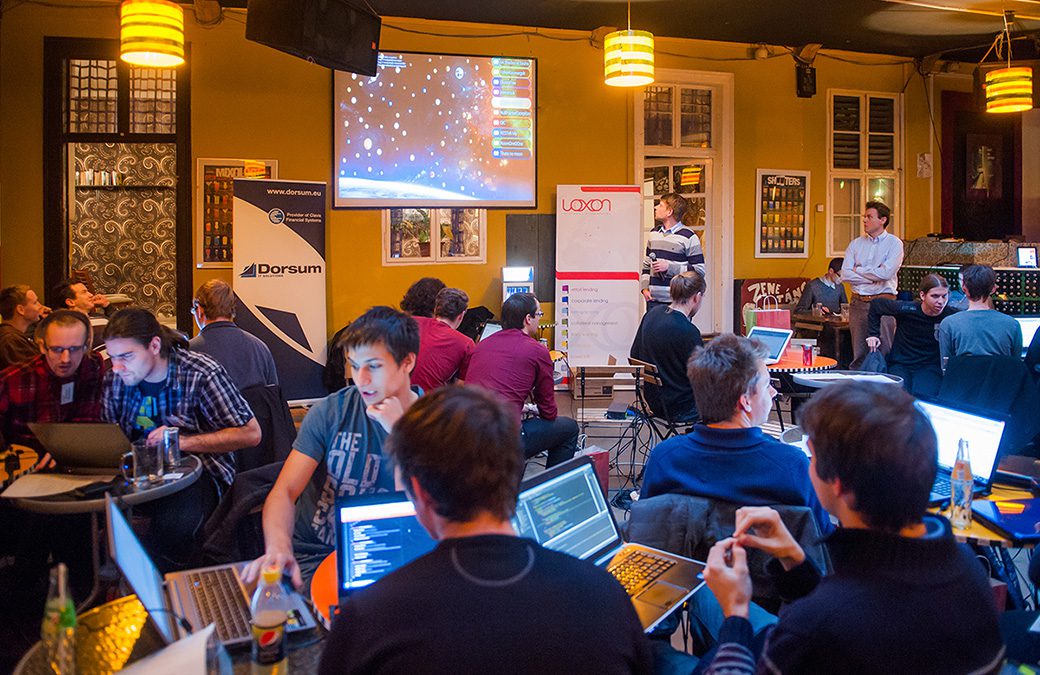 Two PROGmasters teams – consisting of former students – got into the finals of the Loxon Java challenge. It is a great deal and serious professional success that they finished in the top twenty – representing PROGmasters as the only coding bootcamp there. PROGmasters’ The Falcons and Bob a vidra (Bob the otter) teams got the 12th and the 17th place respectively. Our third team ended up in the 43th place among the 78 competing teams. What does that mean? That PROGmasters’ alumni are not only worthy contenders to university programming students and alumni, but they can beat them as well.

Our programmer teams The Falcons and Bob the otter ended up in the 12th and 17th place respectively in the Loxon Java challenge, which ended last week.

No other bootcamp’s team succeeded to get into the finals. The other teams were formed of active or former programming university students. So from now on we don’t have to rely only on employers’ reference when it comes to evaluating our alumni’s knowledge. This is great happiness and a serious professional success for our students, our mentors and last but not least our school.

In the three rounds of the challenge teams competed in an advanced Java quiz, followed by programming a spaceship simulator to fight against robot spaceships and the other teams’ algorithms.

We asked the teams about their experiences:

How important was this challenge for you?

The Falcons: We worked on it for three weeks. We made a lot of effort to succeed.

Bob the otter: We applied for this challenge for several reasons. First of all, we wanted to practice programming to develop our skills. Secondly, we were curious if we could solve complex tasks as a team. So mostly it was for our development but we can say the results are also satisfying for us.

How was working as a team in real-life situations?

The Falcons: We spent the time of preparations in a really good atmosphere. And it was also a productive time for us.

Bob the otter: The most difficult part was the timetable. When and where should we form our strategy and hold our meetings, taking our personal programs into consideration. But we managed to work these things out at last. What made it easier to work together as a team was that at PROGmasters we also did during the course.

What makes you the most proud?

The Falcons: We used technologies we haven’t learnt of. And we discovered them on our own.

Bob the otter: We are happy that our code worked. And we were also happy about the result. We managed to get into the finals after all.

What was the most challenging part professionally?

The Falcons: It’s weird, but it was not programming that meant the real challenge. It was the mathematical calculations to get the right numbers.

Bob the otter: We had to build a model that coordinates our spaceship in a meteorite collecting game, while also hunting down the other teams’ spaceships. We made calculations on paper which we digitalized and programmed afterwards. It wasn’t an easy task, we got to admit.

What helped you during the challenge?

The Falcons: It was the teamwork. We couldn’t have done it without each other.

Bob the otter: We sat together as a team to think, to make mathematical calculations, to plan strategies. When something didn’t work at first, we searched for better solutions, read articles and tried to make it work. We knew many things would fail at first but this was also the challenge for us. We learned a lot during the competition.

Were you afraid of the rivals?

The Falcons: We knew it won’t be easy for us. Our rivals were from well-known universities.

Bob the otter: We didn’t fear them. But we respected them. Our aim was to develop ourselves professionally so we had nothing to lose. The result was the cherry on the top.

Did you initially think you could get into the finals?

The Falcons: To be honest, we hoped we could get into the last 20. And the 12th place is just so awesome.

Bob the otter: At first we didn’t dare to dream about it. Because the rival teams consisted of experienced programmers and university students. Or just had more time to prepare for the challenge. So we are really happy that we succeeded.